There is some confusion about the Seven Sisters Rose, as there are several different roses by the same name. helpmefind.com has six different varieties listed. Can we get some clarity?

A Bit of History…

‘Seven Sisters’ is believed to be an old Chinese garden rose which was introduced from Japan to England by Charles Greville in the early 1800s. John Loudon (England), a most influential horticultural nurseryman and journalist of his time, wrote (1844): “The variety of the color produced by the buds at first opening was not less astonishing than their number. White, light blush, deeper blush, light red, darker red, scarlet and purple flowers, all appear in the same corymb, and the production of these seven colors at once is said to the be the reason why this rose is known as the Seven Sisters Rose.”

According to Charles Quest-Ritson, author of “Climbing Roses of the World”, writes “the clone currently in cultivation was likely grown from seeds imported from Japan and acquired by Phillipe Noisette, a London market gardener. Brent Dickerson, author of “The Old Garden Rose Advisor”, writes about R. multiflora ‘Polyantha’, also grown from seeds imported from Japan that “It is evidently quite variable, and the small number of seeding it has given us have sometimes differed from the type so much that none of the characteristics of the original are preserved.” So, is it safe to assume that seedlings of the ‘Seven Sisters’ roses, also R. multiflora, acquired from Japan may have varied in breeding lines and traits? Once the ‘Seven Sisters’ rose was introduced (1815), it took a few years for it to gain in popularity, but eventually in the mid-century, rose sales started to take off. As the public demand exceeded the supply, nurseries started selling knock-off versions of ‘Seven Sisters’, creating even more confusion.

‘Seven Sisters’ is a medium pink blend Hybrid Multiflora, once-blooming in the spring or early summer, born in large clusters, with individual flowers being less than 2-inches. Height can reach 10 to 20-ft and can get 10-ft wide. Hardy from zones 4b to 9b but tends to be shorter and smaller in colder zones. ‘Seven Sisters’ is not picky, it will grow well in dry or wet, acid or alkaline soil. Prefers full sun but can tolerate some light shade. Being hardy and disease resistant, as well as easy to propagate, ‘Seven Sisters’ is an ideal rose to grow and share with your friends and rose enthusiast. After all these years, ‘Seven Sisters’ is still an intensely popular rose in the landscape.

Alias Seven Sisters includes (but not limited to): ‘Red Seven Sisters’ (not registered) and Félicité-Perpétue (HSem). 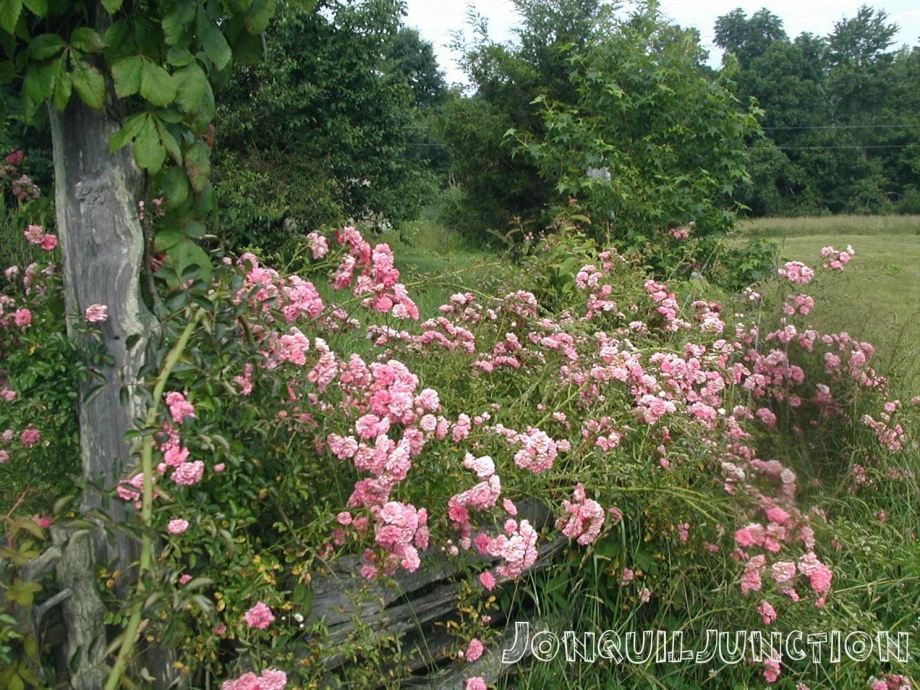 ‘Seven Sisters’ is comfortable on an old farm fence or a formal rose bed. Regardless of where ‘Seven Sisters’ is planted, it will bring you happiness for years. Photo reprinted with permission from Jonquil Junction (Arkansas).

‘Seven Sisters’ Félicité-Perpétue (Hybrid Sempervirens) was hybridized by Antoine Jacques (French breeder) in 1827. This ‘Seven Sisters’ is white or near white with a blush of pink. Its growth, habit, bloom and form are similar to her medium pink counterpart. Hardy between 6b and 10b.Reprinted with permission by Lee Tomlinson, photo taken at San Jose Historic Rose Garden.